Microsoft Has a Sense of Humor? 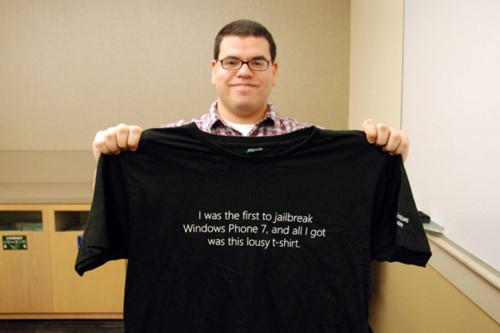 I was the first to jailbreak Windows Phone 7, and all I got was this lousy t-shirt

I’m truly impressed with how well Microsoft is handling its PR lately. After stating that they intentionally made their new Xbox peripheral — the Kinect — hackable and encouraging users to bend it to their will, they’re now taking a similar approach to their new mobile operating system, Windows Phone 7.

In this day and age, jailbreaking is inevitable — and for some (me) quite enjoyable — and rather than constantly patching and attacking (à la Apple), Microsoft has chosen to speak directly with the team that first hacked WP7. They flew them all to the Microsoft headquarter in Redmond, WA to discuss the jailbreak process they used, and the possible bright future of legal WP7 homebrew.

I never thought I’d say this, but with the quality of both Windows 7 and Windows Phone 7, and Microsoft’s apparently newfound amicability, I might actually find it in my heart to one day love Microsoft like I used to. You go MS.

This post originally appeared on an old, defunct blog my friend and I started, called Binheads

Notice a typo, or have a comment or question? Feel free to Send me an email, or edit this entry on GitHub.